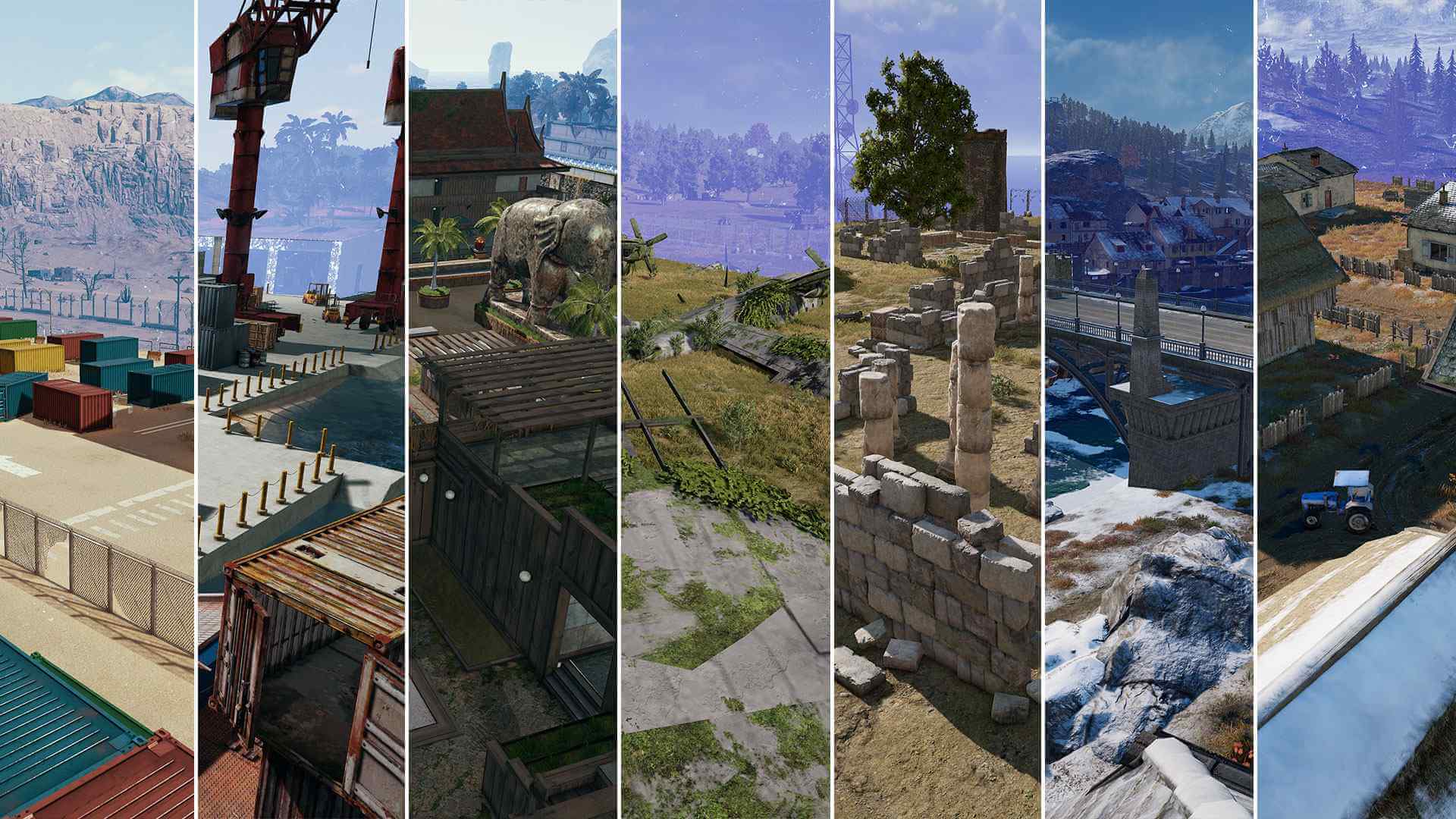 2nd Anniversary is here with an Amusement Park at Erangel!
1) Join a match on Erangel for a chance to experience the Amusement Park.
2) Games and attractions include Shooting Range, Gashapon Machines, and a Trampoline!
3) Try out the Reverse Bungee – launch into the air to new heights!
Hardcore Mode
1) No sound prompts and manual actions are required to pick-up and open/close doors, all to give you a more realistic experience.

PlayerUnknown’s Battlegrounds: PUBG is one of the most successful Battle Royale titles. In this action-packed multiplayer game, 100 players usually fight for survival alone or in teams on a map. Based on the Japanese manga and film model “Battle Royale”, PUBG is one of the most popular representatives of the genre. PlayerUnknown’s Battlegrounds went through the Steam Early Access phase in March 2017 and version 1.0 was released in December 2017. The game has since appeared on several platforms (including: PC, XBOX One, PlayStation 4 and as PUBG Mobile for smartphones).

The PUBG Mobile new update 0.17.0 can bring many new additions, such as the death room, blind color mode and extreme cold mode. In addition to this Erangel map, you can also get a new game theme. This includes Arcade and Amusement Part, which allows players to play some mini games.

Players can try all of these features by downloading the PUBG Mobile 0.17.0. Currently, the trial version is only available for Android devices.

Brothers In Arms PUBG is a new feature that the developers bring PUBG Mobile players. Through Brothers in Arms, veterans with rich game experience will guide and play together with rookies in the game. Rookies can learn from the veterans and master the game quickly, while the veterans can receive great rewards.

Players can enter the Brothers in Arms system and register as a rookie or veteran. Beginners send invitations to the recommended veterans, and the veterans who enabled rookie match status will receive the invitation.

2. Modified the UZI model: added an upper guide for equipping the Red Dot and Holographic Sight

5. Control Settings – New Custom Setting Feature: The left Fire button can be moved off of the edge of the screen as long as the center point of the button is on the screen

8. Added player standby emotes on all maps in Classic Mode, for example, Shivering emote in Vikendi.

9. The standby emote is only visible to the player and their teammates in battle.

10. Added a second confirmation to the Reset button in Custom Settings to prevent players from resetting the layout by mistake.

2. Improved low-level logic and UI efficiency on some Android models for lower power consumption at the same frame rate

3. Increased the combat frame rate of some low-end devices for a smoother gaming experience

4. Further improved the power consumption of some mid to high-end devices

5. Improved the frame length issue on some Android devices for smoother operating experience.

1. Players with 50 or higher Synergy can send Team Reservation messages to friends in the game.

2. Players in the game can receive friends’ Team Reservation messages and choose to accept or decline.

3. When the reserved player returns to the Lobby, the system will send a notification to the two to team up.

2. Added Message. Players can attach a message when sending Sports Cars or Airplanes, and the player who receives the message can perform Pin, Reply, Delete and other actions (Also added Block Message to Blacklist).

1. Improve Synergy through teaming up with or gifting coins among friends.

2. Some space gifts can also help improve Synergy upon sending to friends, which has no daily Intimacy increase limit.

3. Adjusted the proportion of Synergy increasing when sending gifts in Shop.

4. Fixed the issue of losing Connection application in some situations.

1. Added chat item “Radio.” Players can use Radio to post Radio messages with an exclusive effect on the World channel

2. Players can receive Radio messages in the main menu or in the World 2channel, or choose to block the Radio channel in Settings

1. Player and crew verifications are required for players participating in Crew Challenge. Players in a crew need to link social platforms or complete in-game missions to increase their and their crew’s verification points. Only crews that meet the corresponding verification requirements can advance to each phase of the Crew Challenge.

2. A fair and exciting game requires a safe environment. For Group and Finals phases, a security test is required before the game begins.

1. Experience the thrill of advancement: Daily Match -> Weekly Match -> Monthly Match competitions! Monthly match champions will advance to the online finals and compete for the opportunity to enter the offline finals or to watch the global finals at the venue and see well-known players in action!

2. Open daily to all: Six major divisions with matches every day

2. Added Influencer & Crew options to the Video Center for players to follow their favorites, watch videos related to them, and send messages to them

Added Close-Up View: The game will automatically switch to close-up view when players are trying on helmets, hats, glasses, masks, and backpacks

1. Removed the Graphics Quality Selection prompt in the tutorial.

2. Changed the Tutorial options from three to two, and game type proficiency options from Shooting Game to Battle Royale Game

Death Cam is now available in the PC version of PUBG and players are constantly asking to add it to PUBG Mobile. Apparently, the feature is added with the 0.17.0 update, which will let players see how their enemies have killed them.

Cold Extreme Mode is the new survival mode in the PUBG Mobile 0.17.0 beta version. In this mode, players have to stay in the bitter cold by finding firewood and setting fire. Players can also hunt and eat animals and chickens during the “severe cold wave”. Gameplay will temporarily appear for the upcoming harsh cold wave, which will allow players to find shelter and prepare to stay alive.

During PMCO 2019 Fall Split Global Finals, Tencent announced that Color Blind Mode would be added to PUBG Mobile in 2020. Color Blind Mode is available in beta with a 0.17.0 update, making the game even easier. …

Players can enjoy the BETA Version without uninstalling the standard version of PUBG Mobile. To take action from the Standard Edition, use PUBG Mobile from Apple Store or Play store.

Requires a stable internet connection.
PUBG MOBILE recommended system requirements: Android 5.1.1 or above and at least 2 GB memory. For other devices can try out PUBG MOBILE LITE

Note: The APK size is 1.4GB and requires free space, this PUBG MOBILE 0.17.0. We were not responsible for data loss or any unconfirmed circumstances that occurred.