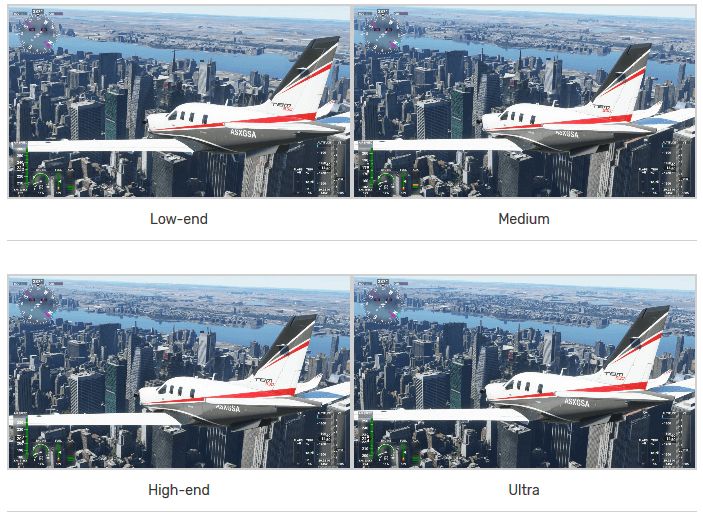 Microsoft Flight Simulator launched on August 17, 2020. So far, it has received mixed reactions from players who try it. This needs to be done somewhere because the graphics are too heavy for most systems to handle. So, in this guide, we aim to help out in this section by providing the best graphics settings for the game. Hopefully, it increases performance and Framerates at the same time.

I’ve been examining the game on its recommended PC requirements today, seeing exactly what kind of performance you can get from a relatively modest PC build.

Suppose your PC just barely meets the recommended requirements for Microsoft Flight Simulator. In that case, you probably won’t be able to see all those brilliant details unless you dial the resolution below 1920 × 1080. Using the components, I described above along with my GTX 970; I struggled to get the game will run smoothly even in 1920 × 1080 Medium.

To test the game, I used the first flight training mission as a makeshift, but repeatable benchmark to try and maintain the same conditions as much as possible. Inside the cockpit, I saw an average frame rate of around 45fps while flying and looking from side to side, but this could quickly dip down to 30fps or less if you enabled free camera mode.

When I tried to turn that up to High-end, the frame rate held steady at 35fps. Instead, it was only by pulling the preset graphics to the low end that I achieved a smooth 60fps, where it averaged around 65fps.

That’s what you’ll probably get with the recommended PC spec if you stick to the default presets in Microsoft Flight Simulator, but you can always play around with the settings a bit more to help get the frame rate up a bit. The easiest way to increase those numbers on the GTX 970 is to reduce the render scale. This will render the game at a percentage of your target resolution (in this case 1920 × 1080), before scaling it back to that target, helping to relieve some of the strain on your GPU without having to settle for a lower resolution.

The latter isn’t ideal yet, but with Low-end only to handle a smooth 60fps while airborne (it gets noticeably more choppy the closer you get to the ground), there’s no other easy way to boost those numbers without dropping. Most things down to that lower preset.

That’s not to say that simply putting a high-end graphics card in a PC with similar specs won’t dramatically improve your experience, of course. When I swapped my GTX 970 for an RTX 2060, for example, I was able to hit a silky 90fps on Medium at 1920 × 1080 and around 70fps on High-end on that same training flight.

However, even the RTX 2060 was unable to maintain a smooth 60fps at the game’s Ultra preset at 1080p as I only saw an average frame rate between 50-55fps at 1080p while on air. That is still perfectly playable, of course, but it was still prone to getting a bit jerky when trying to get closer to town.

An RTX 2060 grade graphics card is probably the minimum type of GPU you’ll need to play 2560×1440 with these kinds of PC specs too. While High-end was almost playable at around 50fps on my PC, Medium was the ultimate sweet spot, averaging 60fps while in the air it only dropped to around 45fps when zooming in on cities and spots. Reference.

Fortnite Chapter 2 Season 7: How to Get Battle Stars

Pokémon GO: What are Strange Eggs? How to Eggs Hatch Quickly

5 Tips for Becoming a Pro Gamer