Valorant is a multiplayer first-person shooter game with two teams competing with each other. Each team has five players, with characters chosen from the eighteen options available in the game. The characters have different abilities and specializations, including healing, poison, and flame, and some can even resurrect allied characters.

The game also has various locations available, so after selecting your character, the next thing is to battle in a random location. Each game round is two minutes long, and you have to win thirteen of them to win the game.

Valorant gives you an attacker or defender role, which you must maintain for twelve gameplay rounds. When the twelve rounds end, you get to play the opposite role. This means that if you were previously attacking, you would get to defend.

For the attacker role, you need to kill all the defenders or explode a bomb to win the round, while the defender role requires you to kill the attackers, stop them from planting the bomb or deactivate it. To prepare for the 2023 valorant betting season, you must know what’s happening this year. From researching the coming valorant tournaments to knowing what the best valorant betting sites are, there’s a lot of prepping to do. Keep reading if you plan to risk your money at valorant events this year. You’ll need the knowledge!

What To Expect In The Valorant Championship Tour 2023 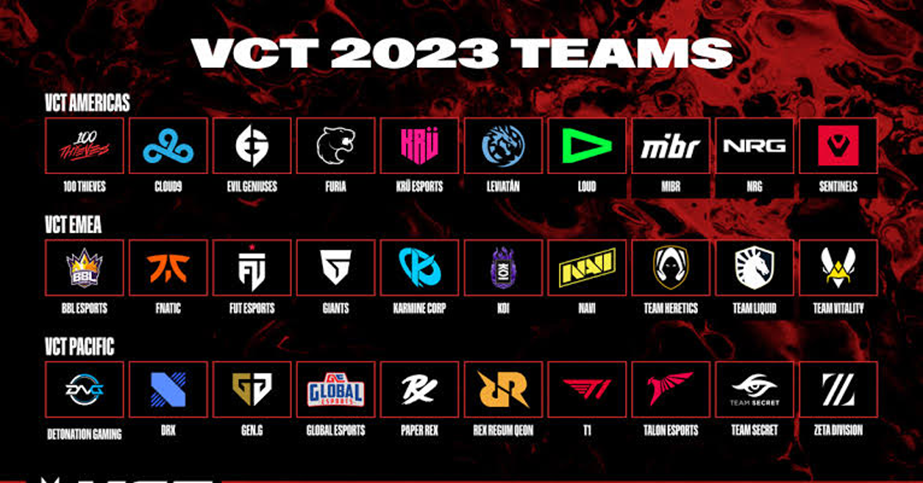 The Valorant Championship Tour is a series of global tournaments organized by Riot Games for Valorant players. It is the biggest thing in the Valorant scene, and as expected, the top five most anticipated Valorant tournaments are here.

VCT consists of multiple events running throughout the Valorant esports season, leading to the most notable event in the tour, Valorant Champions. True betting fans know that there is no event bigger than this one, but there are other Valorant tournaments worthy of mention, and you can bet they all made it to this list!

As the 2023 season begins, Riot Games plans to grow the Challengers circuit to diversify the esports game. The Challenger leagues already play an important role in the sport, but they will be even more critical this year in making Valorant successful. The leagues will also help new players to establish a presence in the sport.

This is something to look forward to as teams that start in the Challenger leagues now have an opportunity to make it into global events. The new Challenger ecosystem covers 21 leagues worldwide; 4 in the Americas, 7 in EMEA, and 10 in the Pacific. The Challenger leagues will comprise the open qualifiers and two splits.

The VCT Challengers began on January 9, 2023, with the Open Qualifiers. The first Open Qualifier was held from January 9 to 13, and the second is set to run from the 17th to the 22nd. The Challenger splits of each league will each end with a playoff tournament where one team will be chosen as the league’s champion.

Riot Games is dreaming and doing big this year. The Valorant championship season will officially open with Valorant’s largest tournament ever, the VCT 2023 Kickoff Tournament. It is scheduled from February 13 to March 5 in Sao Paulo, Brazil. The three-week event promises to be very competitive since there are more team slots this year.

Riot Games has announced that this tournament will have a whopping 30 teams, 14 teams more than that of the last Valorant Champions tournament. The teams will be from three regional leagues, ten teams each. The kickoff tournament will be the first global Valorant tournament in Latin America.

The VCT 2023 Kickoff Tournament will be a one-time event. To top off the anticipation, Riot Games informed fans that the winning team would get an extra slot for their league at the Master’s tournament. 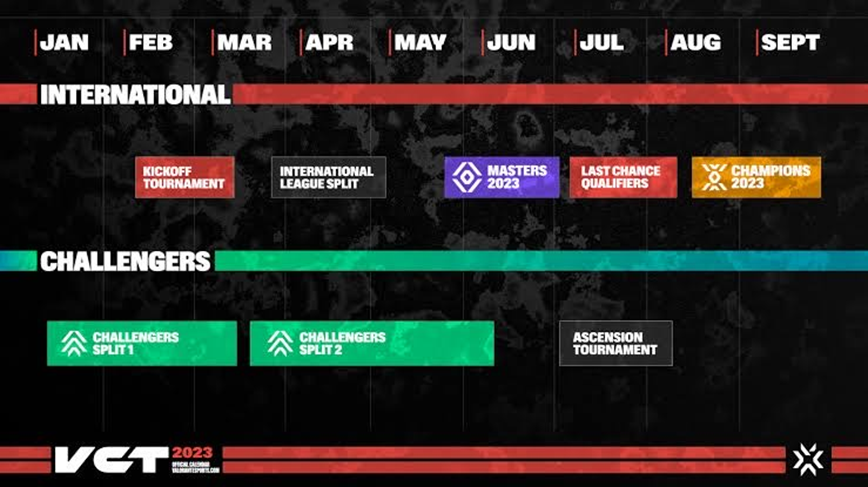 The VCT international league usually has two splits, but this year, Riot Games has decided to replace the first split with the VCT Kickoff tournament. The three international leagues are Europe, the Middle East and Africa (EMEA), the Americas, and the Pacific regions. The EMEA teams will compete in Berlin, and the Americas and Pacific will play in Los Angeles and Seoul, respectively.

The three competitions will run concurrently from March 26 to May 28. The chosen teams have not been announced yet, but negotiations started last year, so you can expect an announcement soon.

The VCT Masters will take place in Tokyo, Japan, from the 15th to the 25th of June, 2023. The top ten teams from around the world will compete for slots in Valorant Champions 2023; three from each region and an extra from the region of the team that wins the Kickoff tournament in Sao Paulo,  Brazil.

VCT 2023 is Valorant’s third esports season, and Riot Games have made many changes to find a chance between Valorant, the franchise, and Valorant, the league. Among the tournaments to look out for this year is also the ascension tournament which will take place at the same time as the Last Chance Qualifiers.

The Challengers Ascension Tournament is a chance for teams from the Challengers division to advance to regional leagues and compete in the Valorant Champions.

What Online Casino Game Is Easiest to Win?

The Most Popular Sports Industry